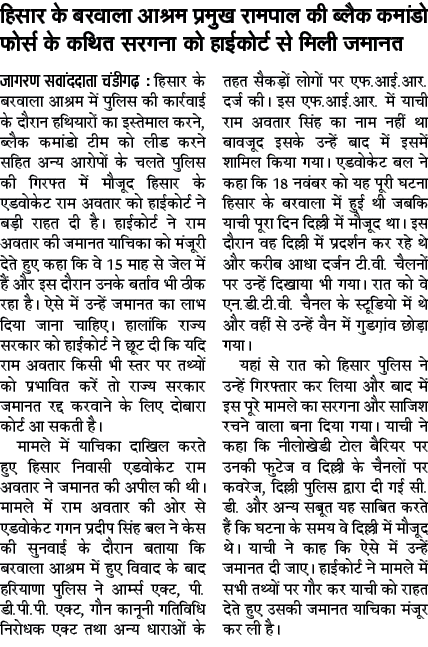 On 17/02/2016, The Punjab & Haryana High Court granted bail to Mr Ram Avtar, one of the accused held in Hisar Jail since the Satlok Ashram Barwala episode of November 2014.

The High Court judgement is a testimony to the blatant lies used by the Haryana Police in framing false and fabricated cases on Sant Rampal Ji and his followers. The judgement is quite comprehensive and can be found at the following link but a concise account is provided below.

The police in their statement alleged that Mr Ram Avtar was arrested on the 18th of Nov on the spot (i.e. from Satlok Ashram Barwala).

The truth is that on 18th of Nov 2014, Mr Ram Avtar was in Delhi and demonstrating on Jantar Mantar along with thousands of other devotees. He also appeared on a TV debate on NDTV on 18th of Nov 2014. The fact is that he was actually arrested from Gurgaon rather than Satlok Ashram as falsely stated by the police in their statement. CD of the live TV debate and CDs containing data from National Highway Authority of India and Delhi Police were submitted as proof.

The police alleged in their charge sheet that a country made pistol was recovered from Mr Ram Avtar on the spot which he used to fire at the police.

The fact is that the police made Mr Ram Avtar sign on a blank paper and later on converted it to a “disclosure statement” in which they falsely wrote that he fired on the police from his country made pistol.

On investigations the police could not recover any country made pistol. They found out that Mr Ram Avtar had a license for a DBBL gun. So the police fabricated a second disclosure statement in which they showed that this licensed gun of Mr Ram Avtar was used to fire at the police. However the police claim fell flat as the Ballistic Report proved that the licensed DBBL gun was not used in the whole Satlok Ashram Barwala episode. Apart from many other allegations, the police had also filed a complaint under Explosive Substance Act. However no explosives were recovered from Mr Ram Avtar.

The above account is just one example of the blatant lies told by the police in formulation of false cases. 15 months have so far passed and the police has been unable to provide even a single evidence in support of their claims.

The fact is that the whole charge sheet is a bundle of lies and all the cases are fabricated. In the end the truth will prevail but the course of law takes its own time which unfortunately is very slow and extremely time consuming. 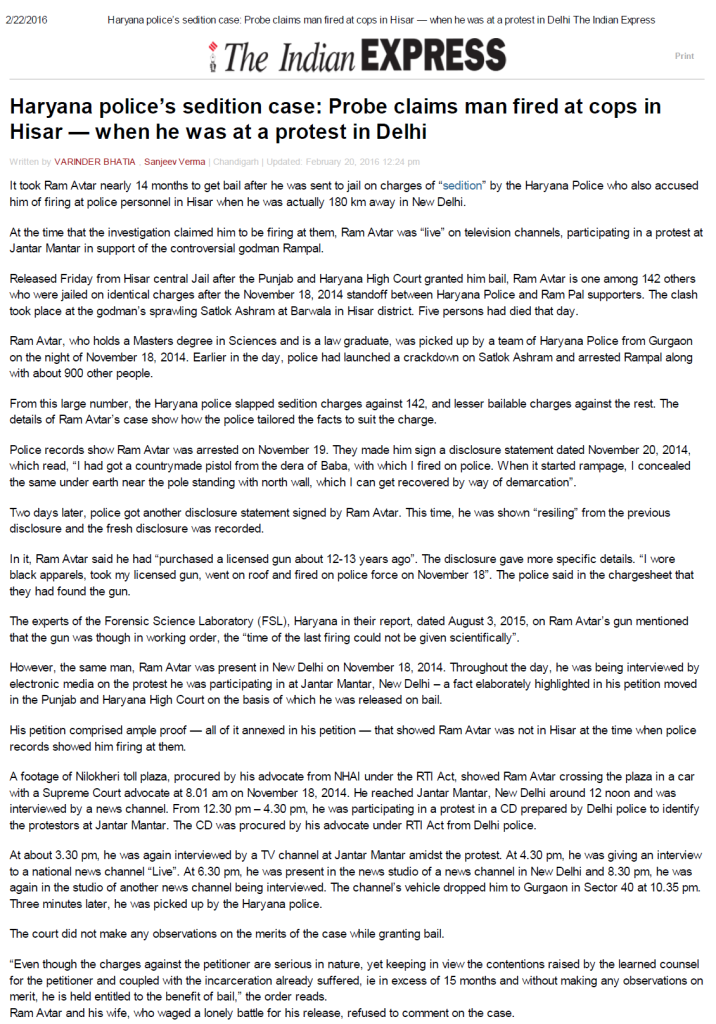