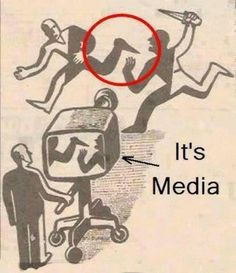 For the Media “it is Business”

The media trades on fear and ignorance. They can twist the facts and present them as they want. They can turn fiction to facts and vice versa. This is one player who generally has a vested interest in the news they deliver. For them it is business. They are there to make a financial gain. They don’t care if someone lives or dies. All they want is “news” and a kind of news that sells. They are more interested in viewers, ratings, rankings etc. rather than facts, truth or  rights.

1) Biased and Judgemental – They have an opinion of their own. Usually ill-informed they chair a debate without neutrality and have a tendency to impose and project their own opinion as if they are always correct. They only agree with someone who shares their opinion and denounce the one who argues with them. They behave as if they are the judge and in the end deliver verdicts as well, which are generally one sided and biased.

2) Reporters / presenters are generally ill-informed  – Rather than doing any research they base their reports on hearsay information gathered from the locals. They hear what they want to hear and then project it the way they want to so as to cause maximum sensation. They all are in a race, competing with each other and all of them are “the first one to show exclusive coverage”. They are in such a haste that they don’t even care about uttering rubbish just to make a mockery of themselves later on.

3) Most of the time they are arrogant, rude and disrespectful – This particularly applies to those sitting in the studios who at times forget basic etiquettes when dealing with their guests.

4) Not afraid of publishing lies – The journalists or the news editors do not hesitate a single bit even if they have to tell lies in their reports to make them sensational.

The Role of media in Satlok Ashram Barwala Episode – November 2014

Prior to surrender of Sant Rampal Ji

The media has played the role of an instigator in the whole episode. They worked as a catalyst to add fuel to the fire. Debate after debate and discussion after discussion they criticised the police and the administration on national channels and portrayed them to be incompetent. Perhaps the police too took notice of the whole thing and the media personnels were the first one to bear the brunt of the police action when they launched an offensive against Satlok Ashram which is condemnable. The media personnel working on the ground clearly did not deserve it but they had to pay for the actions of their comrades working in the studios.

After the arrest of Sant Rampal Ji

Selling stories which involves telling lies, and providing so called “exclusive coverage” has been the media’s aim. In the whole process they have published 99% lies and 1% facts.

There should be a way to check the loud mouthed media. The media should be held accountable for the news they publish. There should be a system whereby the media could be penalised for the wrong news they propagate as they often misuse their position and privelege. The law needs amending.