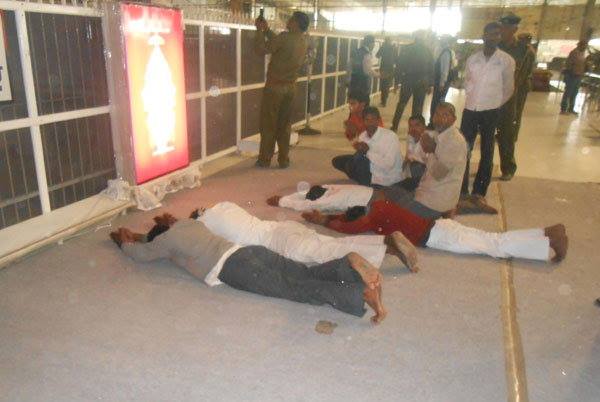 Sant Rampal Ji Maharaj has been implicated in various false cases after the Karontha Ashram episode in 2006. He was granted bail in 2008 and then had been attending court hearings regularly. He was then granted “Permanent Exemption from Appearance” by the court after an application was filed in the court. Hence He was not required to appear in person in the court. Reference – हाजिरी माफी के चलते रामपाल नहीं हुए कोर्ट में पेश

The media didn’t even bother to use their brain, that if a court can issue non bailable warrants on missing 2 court hearings then how can it allow someone to miss 40 hearings. The media, the journalists and the news channels are all paid and biased dimwits who just try to create sensations. They like to make mountains out of a molehill.

2) Sant Rampal Ji was suspended from his job

No one was held hostage in Satlok Ashram Barwala. People had come there at their own will and were staying there at their own will. Even a day after when Satguru Rampal Ji Maharaj surrendered there were approximately 5000 – 6000 people present in the ashram. Had they been held hostage, all of them would have fled before Satguru Rampal Ji surrendered.

The truth is also evident in the following video taken by NDTV journalists.

4) People were Dying of Hunger in Satlok Ashram

No one was dying of hunger in Satlok Ashram. There were enough supplies of food in Satlok Ashram which could easily sustain people for a couple of months. This has been verified by various media reporters in their commentaries.

5) Women & Children were used as sheilds

This is untrue. People were sitting at the entrance of Satlok Ashram at their own will. No one had forced them to sit there. Had they been forced they could have easily walked away or asked police for help as they were right next to the highway and there was police present in the vicinity.

6) Satguru Rampal Ji Maharaj was bathed in milk and the milk was then used to make kheer that was then distributed to devotees at the ashram.

This information has been told by idiots, published by morons and believed by imbeciles. Media personnels have gained this information from locals who hold grudges against the ashram. The media personnels are stupid enough to believe in it and publish it. Nothing more needs to be said about this. This is the standard of Indian journalists. They only look for “Masala” (sensation) and are just degrading their professional credibility by publishing hearsay information without doing any research to justify their claims.

7) There were CCTV cameras inside Female toilets / bathrooms

There were no cameras inside female toilets / bathrooms. Numerous cameras have been installed in the sitting area of the ashram for security purposes. Likewise the camera in question is outside the toilet / bathroom complex and not inside it . The camera is supposed to be facing the hall (pandal) and has been shown to be pointing in the opposite direction. Even then it is just pointing towards the sign board. The actual toilet / bathroom complex is behind the thick concrete wall where this camera has no access. Media /Police tried their best in flouting this point but failed miserably.

This is totally false. The glass cabin from where Sant Rampal Ji Maharaj used to deliver sermons is not made of bullet proof glass. It is made of thick glass to make it sound proof.

Satlok Ashram has 24 hours electricity which is provided by diesel generator sets located outside the ashram. Apart from this there are around 100 vehicles which run on diesel. This is where the diesel is used.

10) Ashram has an Infirmary / Hospital

An infirmary is a place in a large institution for the care of those who are ill. Satlok Ashram also had one first aid centre equipped with x-ray and first aid facilities for the disciples which was provided free of charge. However only primary care first aid was provided in the ashram. If anyone required better healthcare they were asked to seek services of physicians in big cities or taken to Agroha Medical College. Now what objection does the media have with this is beyond comprehension.

11) There was a swimming pool in the ashram

Swimming is one of the best form of exercise. Generally people go to gymnasiums to swim or do exercises. Likewise Sant Rampal Ji Maharaj had a swimming pool in his compound. What is wrong with swimming in your own home or running on a treadmill or do cycling in your own house? The statement of the media reflects pure jealousy.

Either the media personnels are blind or they lack higher cognition. The chair from where Sant Rampal Ji Maharaj used to deliver satsangs is a simple wooden chair with castor wheels. At the time of satsang, Sant Rampal Ji Maharaj used to walk from behind the glass cabin  and first of all bow to the photograph of His Guru Swami Ramdevanand Maharaj, then bless the disciples present in the ashram and then go to his chair. This is evident in all his satsangs which are present on youtube.

The media claims that Sant Rampal Ji Maharaj used to appear on his chair. These claims are totally unfounded.

The media has not been able to show even a single photograph of any BMW or Mercedes car. The reason is simple. Sant Rampal Ji Maharaj does not have any. He travelled in a Tata Safari whenever needed. If there was any truth in their claim, they could have provided at least one picture of those cars with their registration number plates.

Firstly these claims are totally false and secondly after Sant Rampal Ji surrendered, the ashram was open to outsiders and the police, who can easily plant whatever they wish. Arya Samajis have a personal grudge against Sant Rampal Ji and they have been freely roaming in the ashram along with media personnels. They can easily plant such things in the ashram. There is no credibility to this claim by media and the police.

Moreover the ashram has clinical facilities to provide first aid services and it is no big deal to find pregnancy check kits, sugar strips, protein strips, urea strips, haemoglobin kits etc in a clinic. When lakhs of devotees assemble, health clinic / medical centre is necessary. This could however be easily planted wherever you like.

Did the so called journalists ever go to school?